From Pacsoa
Jump to: navigation, search

"We will begin with palms, the loftiest and noblest of all vegetable forms, that to which the prize of beauty has been assigned by the concurrent voice of nations in all ages; for the earliest civilization of mankind belonged to the countries bordering on the region of palms and to parts of Asia where they abound." 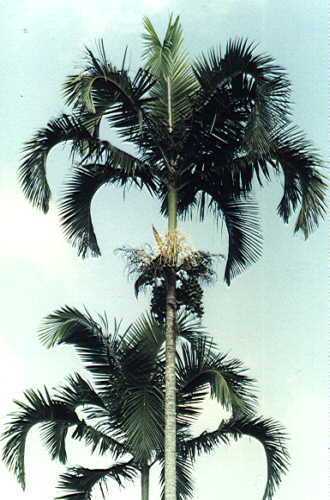 The palm family (Palmae or Arecaceae - both names are permitted) is a large and diverse family of iconic monocotyledonous flowering plants where they are the only family in the order Arecales. Roughly 202 genera with around 2600 species are currently known, most of them restricted to tropical, subtropical, and warm temperate climates. Most palms have large, compound, evergreen leaves that are either palmately ('fan-leaved') or pinnately ('feather-leaved') compound and spirally arranged at the top of an unbranched stem. However, many palms are exceptions, and in fact exhibit an enormous diversity in physical characteristics. As well as being morphologically diverse, palms also inhabit nearly every type of habitat within their range, from rainforests to deserts.

They fill numerous ecological niches and are of great economic importance, ranking third after grasses and legumes in usefulness. The majority of palm resources are extracted from the wild and exploited at subsistence levels, but several are major crops, e.g. coconut, date, betel nut, and oil palm. Palms are also famous for holding biological records, including the largest self-supporting leaves (25 m+ in Raphia regalis), the largest seed (up to 25 kg in Lodoicea maldivica), and the largest inflorescence (8 m tall with 24 million flowers in Corypha umbraculifera).

Palms are among the best known and most extensively cultivated plant families. They have been important to humans throughout much of history. Many common products and foods are derived from palms, and palms are also widely used in landscaping for their exotic appearance, making them one of the most economically important plants. In many historical cultures, palms were symbols for such ideas as victory, peace, and fertility. Today, palms remain a popular symbol for the tropics and vacations.

This category has the following 200 subcategories, out of 203 total.